Mad Circus - 2nd Edition - Another Night To Be Ridiculous 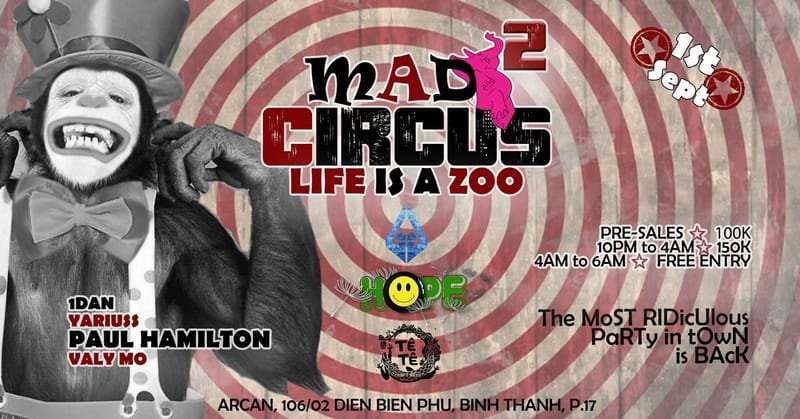 Cause we all end up looking around us in a good party, and think "I love this zoo!" we challenge you to pull out your inner animal... may it be in your outfit or just in your behavior!

🐯While our DJ's are our attractions avoid throwing them drinks they become dangerous. On this special occasion, Mad Circus welcome a pioneer of underground music in Middle East. A dude which is far from playing the monkey normally as his released over 160 tracks of which many charted.

Expect again the unexpected in the most fun atmosphere and #beridiculousas this is a dress up party with:

DJ & Producers in released on various UK labels, we get there a DJ able to ply great deep house, swing you with more groovy House oblast the dance floor with blistering Techno

After a 12 year break, he decided to return to club life to share with you his mood and the idea of house and techno style music. Another Russian magician behind the deck!

Paul Hamilton born January 24, 1974 originally from Malta, had a young upstart in the music industry, known for his ability to read people taking them to a never ending energetic journey beyond any expectations. Playing electronic music for over two decades, he is currently playing and producing deep house, vocal house, tech house, progressive house and techno.
Back in 2004, Paul left Malta for Dubai looking for a bigger market with international acts and it was not long before his name started to rise in the local scene as he hammered practically every venue in town, delivering the same energy only the late Tony de Vit would. September 2005 Paul won the Global Heineken Thirst Dj competition (the worlds biggest Dj competition) impressing the likes of Sander Kleinenberg as one of the judges. After winning the competition, Paul had many openings and worked alongside many artists such as Tiesto, Sander Kleinenberg, Roger Sanchez, K.Klass, Groove Armada and Basement Jaxx.
As a producer Paul is signed to some of the world’s most famous record labels which include Armada Music, Toolroom Records and Baroque Records. He has 160 releases and 13 Beatport top 100 EP’s to date with tracks charted and played by Darin Epsilon, Cid Inc, Dousk and John 00 Fleming just to mention a few.

Valy Mo oscillates between house and bass music, maintaining rhythm and dynamism in his sets. The captivating French producer released his first EP Tokyo Bright on Nest HQ in 2014, with follow up singles on OWSLA, UKF, Ultra Music and Universal. His tracks have now garnered over a million plays across streaming platforms.
Applauded by the media (BBC Radio, Vice, Complex (UK) and playlisted by headliners (Tchami, A-Trak, Diplo), Valy Mo has shared stages across the world with the likes of The Chemical Brothers, Mr. Oizo, The Prodigy, Pharrell Williams, Marylin Manson, Dillon Francis, Boys Noize, Axwell, Nicky Romero and more.
He recently debuted the EP A Nightshift with Valy Mo on Tchami’s Confession Records — one of the most influential house labels in the world. Host of his own radio show on Data Transmission, the multitalented artist has future plans to create a label showcasing burgeoning talents in 2018.


Stay posted on the event page for more details!