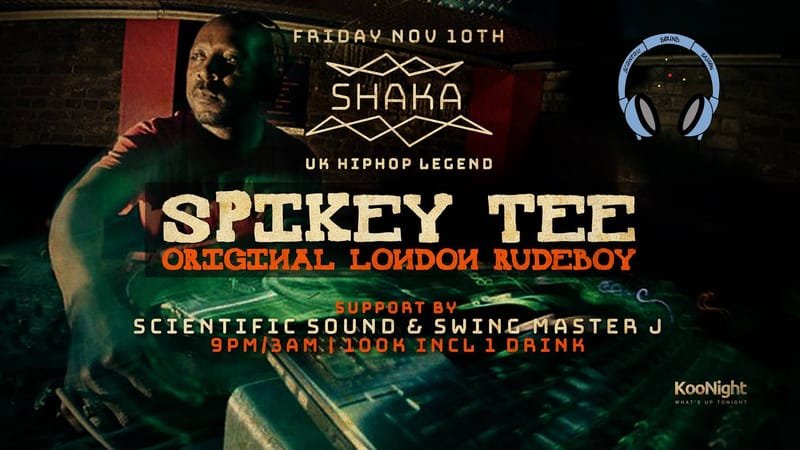 Spikey Tee is one of London city's original 'rude boys'. He has been recording and spinning tunes for over 20 years. Having been a pioneer of the UK Hip Hop scene as one of the founding members of The Sindecut. If you are looking for a track record then Spikey Tee definitely has one. He was first involved with reggae sound systems at the age of 13 acting as a surprise selector/operator in sound-clashes in and around London. It was after singing at one of these clashes, he met DJ Fingers from London hip hop crew the Sindecut who are credited as pioneers of the UK hip hop scene and was asked to contribute to an idea for expanding the group. With a love of hip hop culture Spikey agreed, the band subsequently went on to sign for Virgin Records and released the acclaimed "Changing The Scenery" album in 1990.

After The Sindecut, Spikey joined Jah Wobble's Invaders Of The Heart and was lead vocalist for five years. As the group's front man he brought a real edge to their live performances, particularly when he sang The Abyssinians' Rasta anthem "Satta Massa Gana". Considering the quality stock from which he comes (Spikey is related to legend Bunny Wailer no less!), it was perhaps inevitable that he would so compellingly make the Rastafarian connection. Look no further than the emotive Invaders of the Heart single, "Mount Zion", for a sublime example of this particular string to his bow.

All the while Spikey continued to DJ in and around the UK, mixing hip-hop, R&B, ragga, and drum'n' bass. Not content to rest on his laurels, Spikey also made hit tunes for numerous producers, most notably with top-20 UK hit "Dark Heart", recorded for Bomb The Bass, and "Paper Soldier" for Mannasseh.

After a chance meeting with Dom (Blood and Fire Records/Sound System) and Mr Scruff at a Jah Wobble concert in Manchester, Spikey Tee teamed up with the Manchester hip-hop label Grand Central for a number of collaborations. A track with Mr. Scruff, "Is It Worth It", was received extremely well, as was "Erase The Pain" for Tony D's 'Pound for Pound' album, going on to tour with stablemate Aim as part of a 10 piece live outfit.

After striking up a relationship with Blood and Fire Records, he was included in the Sound System line up and performed around Europe with reggae legends such as Dennis Alcapone, Ranking Joe and Horace Andy. Spikey also appears on the Morcheeba album "Big Calm" and their live DVD From Brixton To Beijing, where his vocals feature on "Friction" and "Shoulder Holster". He can also be found on Mark Rae's debut solo LP, "Rae Road", on the final track "Throne" and also on Dual Control's Grand Central Records debut album "Left Or Right" performing "Burn It Out"..

He has watched Drum and Bass grow from its humble beginnings on London pirate radio, to the world wide phenomenon that it is today. Spikey Tee is now resident in Australia, but tours the world DJing and MCing

DJs on the Night