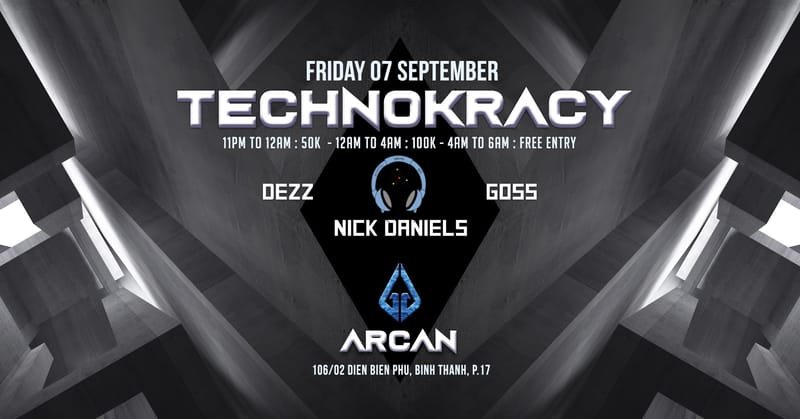 Power to Techno! Techno with power. This is Technokracy. Nothing less and nothing more than pure techno bangers to get your feet stomping. Being broadcast live on Scientific Sound Asia Radio, for listeners around the globe.

Nick Daniels (RSA) is an aspiring DJ from South Africa who started his DJ journey back in 2013. His sets comprise of very melodic deep house sounds to hard whipping energetic progressive electronic sounds. You may know him? you may not, but the unflinching fact about this fella is that, he actually has been in the scene for some time. Placing his priorities in more of a background status, but still remaining quite relevant when he had to.

Its actually his mammoth music collection that, makes you realize he is quite the cone-sour of sound. Like a friend we all might know "Tulzy"- Nick is a avid collector of sound and really dissects music, simply because its truly his passion!!!

He is the co-founder of Deep Satisfaction which was a brand brought to life the latter "First Thursday Cape Town South Africa" and no one could anticipate the lovely music policy and attentive care to the crowds smiling needs would be so well kept. In true "Nick" fashion, he took the bull by the horns and decided to close the party his "Damn-self".

Now resident in Ho Chi Minh City, Vietnam he is becoming established as a DJ here, playing a variety of Electronic styles and getting the party moving, welcome onboard!

Trained by HADRA Festival Association TRANCEMISSION 2016, Goss proposes DJ sets exploring several music styles such as Psytrance, Hardtek, Raggatek, Acidcore, Tech-house and Techno. In 2017, Goss came back to Saigon, a city he studied in before, and started building with his brother Flo what would become ARCAN.
At the same time, Goss, was getting first recognition as DJ and party organizer. �After touring for 2 months in Vietnam and Cambodia, Goss worked as resident DJ and organizer for Spirit Of Nature at May Cay. Since then he organised and DJed for several venues in Saigon such as Piu Piu, Last Call or Lighthouse and Broma.
�His artistic signature is his unusual and strong powered music selection.��

Dezz (MY)
Discovering turntables and the sounds it could churn out with a mixer connected to the
speakers was the best thing that had happened to him. Passion and imagination for electronic
music have since become an addiction.
Dezz speaks of tasteful musical sense that is much supported by many experienced DJs
around town. His wide taste towards dance music makes him one of the very few DJs who can
adapt his musical style to suit the mood that he intends to create for different venues. Being
very much a part of the dance scene since his teen years has definitely helped much in
cultivating his knowledge and preference for playing his own fusion and eclectic sound that
can be described as deep, progressively melodic and techy to permanently engraving his name
into the industry and becoming a familiar face behind the decks of some of the finest clubs
around the country such as Zouk, Velvet Underground, Maison, Nouvo, Sugar, Espanda, Pure
Bar, Marketplace and outdoor events like Transit 50 hours non-stop New Year Party. As he continues to blur the line in between genres, he
travels abroad playing at the legendary Full Moon Party at Koh Phangan and Koh Samui in
Thailand, Ho Chi Minh City and Hanoi in Vietnam and Melbourne in Australia.