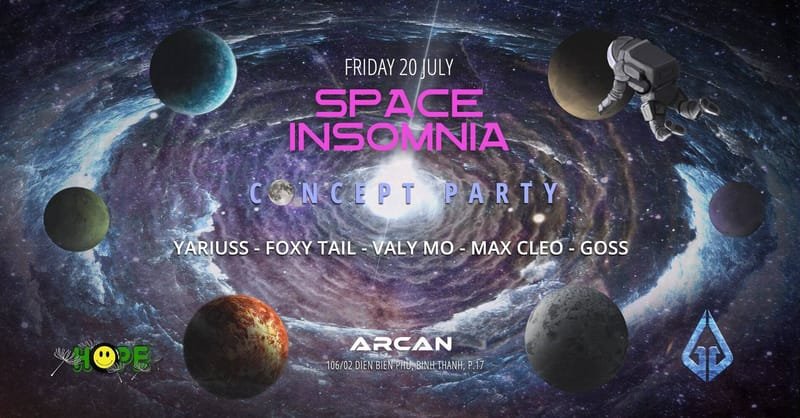 SPACE INSOMNIA: c☄️ncept party
Brought to you by the creators of the Mad Circus

Since you got ridiculous properly on our last party, let's give you something different while we cook the next #madcircus

Get lost in Galaxies and watch the stars!

Details are to be revealed soon, planet by planet.

This is a GLOW IN THE DARK thing twisted by our mad brains. So bring anything shinny and glowy!

Yaroslav Kuchin (Dj Yariuss) after a 12 year break decided to return to club life to share with you his mood and the idea of house and techno music. His last podcast at Arcan put us in Space. More? Yes!
https://m.soundcloud.com/yaroslav-kuchin

New in town and freshly arrived from Cambodia Dj Foxy Tail is a bunch of happiness and dreams.
Behind the deck she has this very special ability to push people on the dance floor with very eclectic and surprising sets exploring all genre of electronic music. If you were at the Mad Circus you know what I mean. Let's see what she will prepare for us this time!
Katya Iskra is a dancer in the past. She knows what kind of music to play to make people dance.
She was dancing for 15 years in the past. Worldwide. Japan, Italy, China.
Then she decided to quit dancing... and suddenly realized she was addicted to music and stage.
Step by step she started to play music on after parties in Chengdu city (China) for European community. Feeling such a big support about her music choice and good playlist she decided to learn how to Dj in a proper way. After finishing 2 courses of djing school back home (vinyl & cdjs) she went to travel. And that's how everything just began.
She has been playing for a year and a half but during this short period of time she already played in Russia (Yekaterinburg, Sochi), Indonesia (Bali, Gili Air islands), India (GOA), Cambodia and now she’s here. Favorite style is tech house. Most of the time her performance a is unique mix of tribal house with african and ethnic vibes.
In addition to this, Foxy Tail is:
Member of 10 days festival "Green Family" in Sochi city, Russia - March, 2017.
Organizer of special parties "Spread the light" in the end of last season in GOA, India.
Resident Dj in Otres corner bar (Sihanoukville, Cambodia) and Police beach open air (Koh Rong island, Cambodia).
Resident Dj at Arcan

Valy Mo is oscillating between house and bass-music, his sets have for watchword Rhythm and Dynamism, in the style of Chris Lake or Tchami.
First, he was noticed by Crystal Castles and Skrillex, he released out his first EP on Nest HQ (division of OWSLA, label founded by Skrillex) will follow singles on Owsla, UKF, Ultra Music and Universal. His unique style made his music often hit the million of plays on streaming platforms.
Applauded by the media (BBC Radio, Vice..) and play-listed by the headliners (Tchami, A-trak, Diplo...) he tours through France and Europe to Japan.
Valy Mo shared the stage with Chemical Brothers, Mr Oizo, The Prodigy, Pharell Williams, Marylin Manson, Dillon Fransic, Boys Noize, Axwell, Nicky Romero, DVBBS to quote only them.
He freshly released his new EP on Confession Records (Tchami, Malaa, Brohug) which topped the Beatport Charts and his upcoming releases are planned on the biggest labels for this year. He is currently travelling in Asia to make it discover his music and universe so don’t miss this unforgettable show!
https://soundcloud.com/valymo
https://open.spotify.com/artist/2GOqvtSlw1DetJcV3p0fYH
https://www.facebook.com/ValyMo.music/
https://www.instagram.com/valy_mo/
Online Press-Kit: http://valy-mo.tumblr.com/

Max Cleo is the only female DJ in Vietnam to choose underground dance music as her primary focus. For Max, "underground" means fresh, new and energetic -- three words that aptly describe her sound.
2013 was a breakthrough year for Max beginning with a series of downtempo sessions in capital Saigon city and in the tropical beach paradise of Mui Ne, Vietnam. 2013 continued to be a banner year with opening sets for Wally Lopez, Celeste Siam, Sebastien Gamboa, Andy Baxter... and Timmy Vegas at Blanchy's Tash . Max also became a regular with Kenzo Trinh's Tech to Ibiza parties, as well as her own weekly Melodica parties at Vasco's, Broma with other numerous events expanding her reputation along the way for uniqueness.
In addition Max created her events night Melodica – “journey to lands of deep sound” - to become one of signature nights in Saigon. Max Cleo also made her way to play at the Observatory Club with her “deep” underground music.
Max went on to play for Official Wally Lopez after party in September night at Last Call Club in Saigon, and went home with the thump up of Wally Lopez.
On the 8 December 2014, Max marked her 2 years DJing with a very successful nonstop 8-hour set at Last call Club Saigon, setting aside any doubts that her focus is clearly in underground Music.
2015 Max announced her Melodica tour and continued with numerous events and parties and tours locally and abroad as her appeal broadened including Thailand, Japan.
Since June 11th 2015 Max Cleo returned to Blanchy’s Tash as its resident DJ for every Thursday and Sunday and she has toured extensively during 2016 across the country. With invitations overseas and reputation spreading rapidly, the future remains exciting with new events and projects in the pipeline, stay focused, stay tuned to Max Cleo and her unique sound.
2017 has opened with some great gigs in Vietnam and interesting projects in the pipeline to be revealed. Already under her belt are tours to Moscow, Russia for an exclusive club and festival event at the beginning of February and gigs in Hanoi firmed up.
Max is working extensively on recording and 2017 looks to be Max’s year both domestically in Vietnam and internationally as the appeal for her pure deep sounds broadens.
Stay Tuned.
https://www.mixcloud.com/maxcleo/
https://soundcloud.com/max-cleo

Trained by HADRA Festival Association TRANCEMISSION 2016, Goss proposes DJ sets exploring several music styles such as Psytrance, Hardtek, Raggatek, Acidcore, Tech-house and Techno. In 2017, Goss came back to Saigon, a city he studied in before, and started building with his brother Flo what would become ARCAN.
At the same time, Goss, was getting first recognition as DJ and party organizer.
After touring for 2 months in Vietnam and Cambodia, Goss worked as resident DJ and organizer for Spirit Of Nature at May Cay. Since then he organised and DJed for several venues in Saigon such as Piu Piu, Last Call or Lighthouse and Broma.

His artistic signature is his unusual and strong powered music selection.