After the successful Hip-Hop Don’t Stop Vol-2 in District 1 we are back with Some HIP-HOP goodness for all of you! 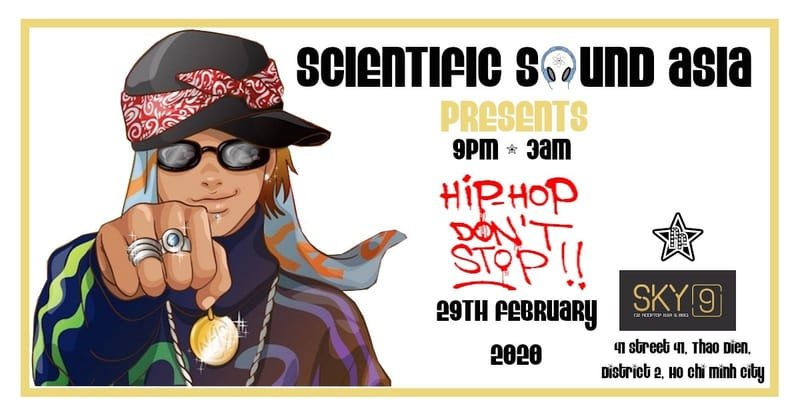 Expect some Old Skool Beats thrown in with some New Skool flavours at Sky 9 Bar Saigon. Come and shake your stuff on the Rooftop Bar and enjoy the Beats and sights of Saigon. As usual the Scientific Sound DJs will be spinning on the HIP HOP Standard Technics SL1200 turntables!

DJs on the Night:

🔥 Tus 🔥
Warming up we have Vietnams' very own DJ TUS!!!
From Ho Chi Minh City once a “the Pearl of Far East", rises the raw sound of DJ Tus, with New school Hip/hop, Trap, R&B. Tus Graduated as one of the best students from the Golden Cast Academy from MUSE INC and is the resident DJ of multiple nightclubs in SaiGon, whilst he is still learning his craft his style is sure to mesmerise you!

He has been performing since the age of 14 and is a regular DJ in the Underground scene in Vietnam. Starting of in his bedroom in East London with a pair of Soundlab DLP1 turntables and a 4 track mixer. He was around for the birth of House, Hip Hop and the Drum and Bass scene which are now global. Be sure of him throwing down the rawest HIP HOP in his 32nd year as a DJ!