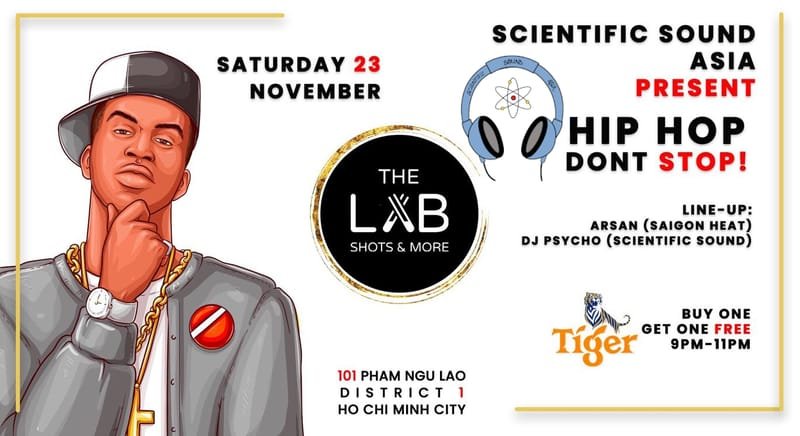 So after a Long Break following Too Many T's event back in March we are back with Some Hip Hop goodness for all of you! Expect some Old Skool gems thrown in with some new Skool flavours at the coolest Shots Bar in District 1 early bird drinks offers on the night include:

Come and shake your stuff on the Rooftop terrace or Chill in the first floor bar and enjoy the beats!
DJs on the Night:

ARSAN's live DJ sets include some of the best mixing of hip hop, house and trap music. She is currently the resident DJ of Saigon Heat Basketball team and performs at venues around Vietnam.

DJ Psycho - UK:
DJ Psycho-UK AKA Bearhead has been performing since the age of 14 and is a regular DJ in the Underground scene in Vietnam. Starting of in his bedroom in East London with a pair of Soundlab DLP1 turntables and a 4 track mixer. He was around for the birth of House, Hip Hop and the Drum and Bass scene which are now global.

He has Dj-ed at some of the best venues in London including Scala, Bagleys Film Studios, 491 Gallery, 291 Gallery and 333 amongst others. He has DJed at many venues in Vietnam including Piu Piu, Basement, Indika, Cargo Remote, Pogo Beach Club, Dragon Beach and others.

He Has D-jed on some of the leading pirate radio stations in London including Axe Fm and Fantasy FM and is now the head honcho of Scientific Sound Asia.  He Has DJ-ed Extensively in the UK, West Indies, Australia and Vietnam.