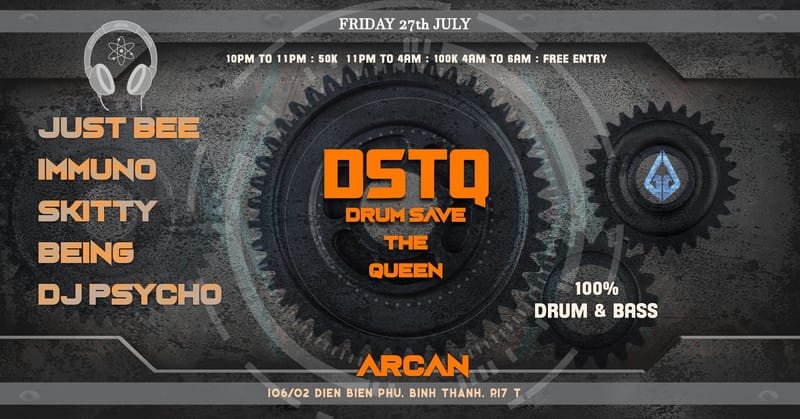 👊👊DSTQ returns for its July edition with our first international guests👊👊

Expect nothing but pure undiluted Drum & Bass sounds from around the globe, from Liquid to Neuro-funk to breaks, if its creative, we play it.

With a new team on board, DSTQ @ Arcan is fast going to become the place you go to hear world class D&B in Saigon. We are excited for our future plans, which will see not only top quality residents providing the full spectrum of D&B, but also esteemed guests passing though as part of their SE Asian tours.

Spread the word - Drum & Bass has found its home in Saigon.

✔IMMUNO:
Nick Gavin AKA Immuno, hails from New Zealand - one of the world’s most prolific DnB scenes. When Nick dove into DJing at an early age he found himself quickly climbing the ranks. It wasn’t long before he was hitting the making as a finalist in New Zealand DJ competitions and being invited to play regularly to support A-list atists such as Concord Dawn, Dose, Teknik and Need For Mirrors.

In 2014 he made the move to Hong Kong. For the past several years he has truly made waves. He has featured on the line up of numerous Bass and DNB events including King of Kowloon (Heavy HK), the Great Wall Festival, Hummingbird, Secret island Party and Drum’n’Bassment to name a few.

Now a core member of the Unchained crew he is looking forward to pushing the D’n’B scene throughout China! Known for his high energy mixing, 3 deck sets and artfully curated half-time and broad spectrum Drum and Bass selections, lets be clear... Immuno is an experienced dance floor aficionado - guaranteed to please.
🎶https://soundcloud.com/immuno

✔JUST BEE:
From early days in Lan Kwai Fong, to a fateful night at Soul Healing in 2014, Just Bee has taken an insatiable hunger for the perfect sound, and has become one of the region’s next big tastemakers and an icon of this drum and bass scene.

Inspired by the likes of Noisia, Alix Perez and labels such as Dispatch, Vision, Exit Records and CIA, the tastemaker combines an insatiable hunger for new sounds, roots in dubstep and drum and bass, and a tight, driving mixing style with which she commands the room. She fills the night with wave after wave of sonic depth in her quest to bring sounds to the world only best experienced in Hong Kong and South China’s underground.

Her magic touch at the decks makes her ready to take over China as a core member of Unchained, one of the biggest underground crews in the region. And with an ever-evolving style, this talent is a can’t-miss.


✔SKITTY
Hailing from Wolverhampton, Gavin Skitt better known as SKITTY has been a leading force in the West Midlands Drum’n’Bass scene since the mid-nineties. It all started back in 1991 when he heard early live tapepacks from events such as Quest, Fantazia and Edge.

Inspired by DJ’s such as Mickey Finn, Top Buzz and LTJ Bukem, SKITTY started to buy records a couple of years later at the tender age of 13 and eventually purchased a pair of decks so he too could represent.

Since 2004, Skitty has released tracks on prestigious D&B labels such as Metalheadz, Subtitles, Renegade Hardware, Osiris Music, Trendkill alongside many many others. Aswell as collaberating with artists such as Kryptic Mindz, Gridlok, Dylan, and long time friend Nolige.

Now with around 15 years history in the D&B scene, Skitty is seen by many as one of the true underground soldiers, never one to compromise the integrity of his music. For the past 9 years Skitty has focused his attention on running his Foundation X imprint which has seen tracks getting supported from people such as DJ Hype, Total Science Loxy & Ink, Double O and Mantra plus many others.

“I have recently fell back in love with the pre and post millennium vibes, listening to producers such as Bad Company, Stakka and Skynet, Kemal & rob Data, Ed Rush & Optical, Cause 4 Concern, all that type of stuff. It still sounds fresh and vibrant to this day, so ive been taking an awful lot of influence from those guys and also producing Techno under my BrukRode alias has opened me up to Techno music like never before.Dj’s like Marcel Dettman, Ben Klock and that whole Berghain/Ostgut Ton sound have helped inspire

for the past few years, and i think that comes across in my recent output” Skitty is also a versatile DJ who lays down a much deeper sound, getting the mood down to the Underground and ultimately setting the tone.

At his current location in Saigon Skitty co-hosts a Drum and Bass night called Rehab with Scientific Sound Asia and continues to produce and release quality Drum and Bass Rhythms on his label. He also DJs regularly around the Asian Region and also in Vietnam at Venues such as Piu Piu, Arcan, Basement and at festivals such as Cargo Remote Festival, Vibe Nation Festival and
others.

✔DJ PSYCHO
DJ Psycho, Real Name Tariq Azam is a versatile London DJ Starting with his first pair of decks when he was just 14. He was a real Hip Hop fan when he was growing up liking Public Enemy, KRS1, Run
DMC and the Beastie Boys et al.

When he reached his early teens the Acid House and Hard-core scenes were in fruition and he became well known in the underground squat parties around the East End of London as a DJ. DJ Psycho, through a friend’s sister was introduced to the Production House Records Crew at about the same time and a lifelong friendship begun with some of the Artists on the label such as DMS, The House Crew and X-Static and he regularly attended events and gigs with the Production House Crew and was around for the production of some of their classics.

DJ Psycho has played on some of the leading pirate radio stations in London including Axe FM and Fantasy FM. Additionally, he was part of the infamous Outcry Syndicate, played at the OTT parties and London Overground parties which brought warehouse parties back into the fold in the UK after the Criminal Justice Act. He has played extensively in the UK, West Indies, Australia and Vietnam.

DJ Psycho plays a variety of styles depending on the promoter Hip Hop, Drum and Bass and Deep House are the main genres he plays and he has an ability to get the crowd moving. He has played at some of the best venues in London including Scala, Bagley’s Film Studios, 491 Gallery, 291 Gallery and 333 amongst others. Additionally he plays at many venues in Vietnam including Piu Piu,
Basement, Indika, Cargo Remote Beach Festival, Pogo Beach Club, Dragon Beach and others.

✔BEING
One half of the team behind the Colours events in Saigon, Being plays a forward thinking selection of D&B, but with tons of groove.Expect the unexpected.